Today I share with you my Made with Moxie Prefontaine shorts. I made them before my Upton maxi dress, but they have been constantly worn since. There are a few patterns like this one out there, but for some reason, these struck me as the ones for me. If you are looking for a similar pattern that is free, check out Purl Solo’s City Gym shorts (goes up to 46 inch hip).  The Prefontaine shorts, however, go up to a 55 inch hip and have pockets. I could have graded up the City gym shorts and altered them for a pocket, but I decided to go with the Prefontaine shorts. I’m glad I did.

Shorts are a continuing mission for me. I need to break that scarrier (a barrier you are scared of…lol). This year is all about fashion challenges to myself and conquering fashion scarriers, because of what people and magazines told me growing up.

Shorts are a scarrier for me. I haven’t worn them in public since I was in my teens and the last time I wore them…I had some mean girls at school make fun of my legs for being fat and super duper white and pale. I guess they were making fun of my entire fat body, but I was wearing a flowy peasant top a la mid-90s with cut off jean shorts so that translated to me hating shorts. I immediately went home and tossed the shorts in the garbage and never wore them again. My legs also become a huge object for my hatred after that. I’ve been pretty honest about my struggles with mental health. My legs were a target for self harm for most of my teen years until about 21 when I stopped harming myself for good. YAY ME! Ridiculously proud of myself for how far I have some in uh…almost 15 years.

Shorts are still a scarrier, though. They are a big part of me healing myself and saying “eff you, bullies of the past!” and healing the mental health scars internally. With all my health issues, I can’t change my body very easily so it is important to me that I embrace it and love it and work past these scarriers. 2 weeks ago, I posted this on Facebook and IG:

My body does great things on a daily basis just trying to keep my joints from flying off to Nantucket. I have to appreciate it for that and for how it helped me my whole life. Sure I will still curse every time I have weird things happen like dislocating my shoulder by putting on a bag. But it’s the only body I have. So I embrace its flaws and appreciate its strengths.

Shorts and trying out different dress silhouettes (tent dress, maxi dress) is really important to me. Next one is a two piece swimsuit to get into the pool for exercise.

Back to the Prefontaine shorts.

The thing is that I’ve made them, but there is no way I would or could wear these shorts out in public unless I was at the beach or back from the gym. They are a lot more like pajama shorts than I originally anticipated. That is totally okay, of course, pj shorts with pockets are an amazing thing and I will have tons of these, but I was looking for a nice short to wear around the city and feel confident in. On reflection, maybe a loose-fitting pair of shorts was never destined for that, but I didn’t know unless I tried.

The fit on the Prefontaine shorts isn’t really what I was hoping for. I graded up to a size 28. I could definitely have just done a size 26 or maybe with the ease tried the size 24 since my hips are 56 inches (to 58…depending on the time of the month) and the size 24 is for 55 inch hips. I think the ease might be a little bit more than the pattern suggests. For size 26, it should be only be a couple of inches of ease, but my shorts measure at 62 inches. Edit: the size chart is also not very detailed. It is more detailed with the finished measurements than anything else. So the ease for a 26 could be correct, but it’s hard to know without a complete size chart. It could definitely have been my grading, though. I’ll for sure be making the pattern again, but I will try sizing down next time. The butt fits okay, though, so even if I do size down, I want to keep the crotch curve almost as is on the back with a slightly larger adjustment. I’m not a huge fan of how the front looks. I have a shorter front crotch curve, which I discovered while making my Misty Jeans, so there is fabric pooling and pouching. Not the greatest look at all! Sizing down may help, but I also plan on shortening that curve for a better fit. I love the pockets, though, and the bias tape edges. It makes for a fun around the house short.

My main reason for not wearing them outside of the house is the potential for the crotch to ride up as I walk and for me to get chub rub. The shorts aren’t super functional unless they stop me from chafing. Around the house, they are fine, but I need something functional for walking. If I were to make these for outside shorts, I would have to lengthen them to cover my thighs, but I think I really just want to make a bunch of these for pj shorts for around the house.

I already have the Jennifer City Shorts from StyleArc cut out, but I just got the Itch to Stitch Belize shorts for a shorter short since the Jennifer City Shorts hit about knee level. The other plus of the Belize shorts is they seem to have a higher waist, which I much prefer. I also love the elastic back with the flat front and the skort version, but I don’t think that will be my first version of them. I’d prefer to try to get the fit correct and I think I might be lazy with the skort since that would just cover it up. I will need to grade the shorts up to a size 26.

And now here is a mini-rant. I know that plus sized women often aren’t the market for shorts, but there is a serious lack of patterns for them in bigger sizes. Shorts are becoming more popular in plus size fashion. I wish for two things: 1) that sewing patterns would hurry up and meet fashion trends so I can sew them and 2) that sewing pattern companies were more adventurous with their options. Release all the plus sized crop trops, short shorts, tank dresses, bodycon dresses, swing/tent dresses, sleeveless everything, and lingerie, for god’s sake, give me PLUS SIZED lingerie patterns! I just want more options and to get past more and more scarriers so that other women like me look at how I am rocking it and say, “hey, I can do that too!” or maybe they get past a different scarrier. End rant.

And back to some details on the shorts. They are made with a midweight soft as heck purple cotton that I bought years ago during a Fabricland closing. The hot pink bias tape is from a local shop. I recently learned that I have access to way better bias tape than 90% of the world. The stuff in packages is apparently what most people have, but my local stores actually make bias tape with their cotton fabric so you can match the bias tape perfectly to the cotton solids colours available in their shop. The bias tape isn’t a poly/cotton blend, but a nice cotton. It’s prices comparably to the stuff in packages. So now I get why people say they hate purchased bias tape. Before I was all “this is a good alternative.” But now I realize my privilege in having access to much better bias tape. There are higher qualities and 100% cotton bias tapes in the packages, but they aren’t everywhere like the scratchy poly/cotton stuff.

Even though most edges would be finished in the bias tape, I also finished them with my serger.

Construction went okay. I was watching Stephen King’s The Mist while making them. I’ve seen that movie about 20 times and got reminded of it while recently devouring Stranger Things on Netflix. People who have seen both can understand a bit of the correlation with Stranger Things in my mind. Even though I’ve seen the movie a lot, certain things distracted me. I won’t spoil it, but it’s a really good movie imho. The ending in the movie is controversial for book fans and even for movie fans, but I think it’s a good cinematic ending and it kills me every time. Basically, the movie is emotional, scary, and a great psychological trip.

But….it’s not good watch while you sew material…

I sewed the pockets to the front crotch curve during a particularly tense scene. So that happened. After ripping that out, everything was fine. The instructions are really clear.

I wore the shorts with a new Concord tank top with cotton lycra covered with cats in crowns. How much better can a shirt get?! Here pictures of me without makeup or having done my hair at all and I pretty much don’t care! I kind of love them. You can see the wicked hot pink and purple argyle KT tape on my shoulder that my Physiotherapist put on me. She gets me. She said she would have offered most people the black stuff, but not me. 😉 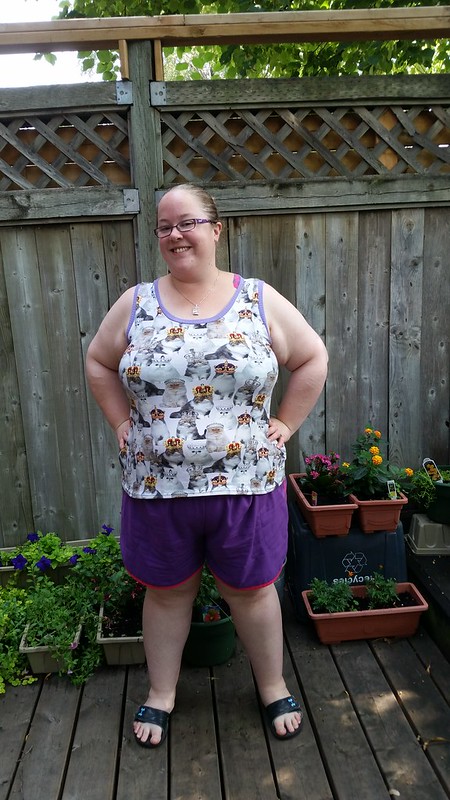 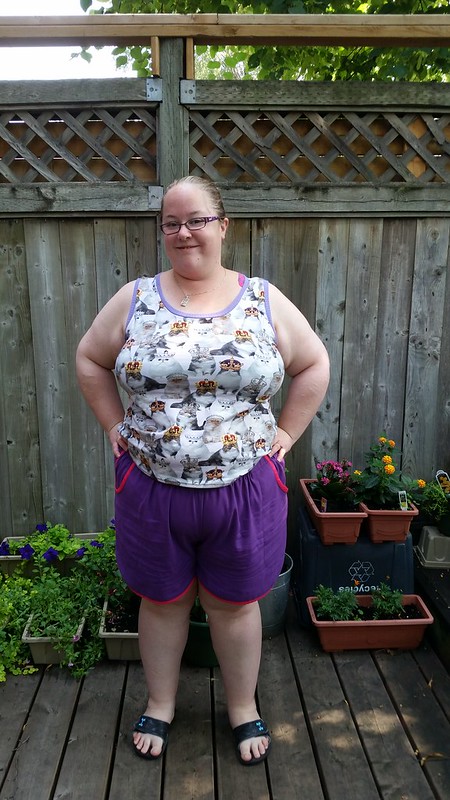 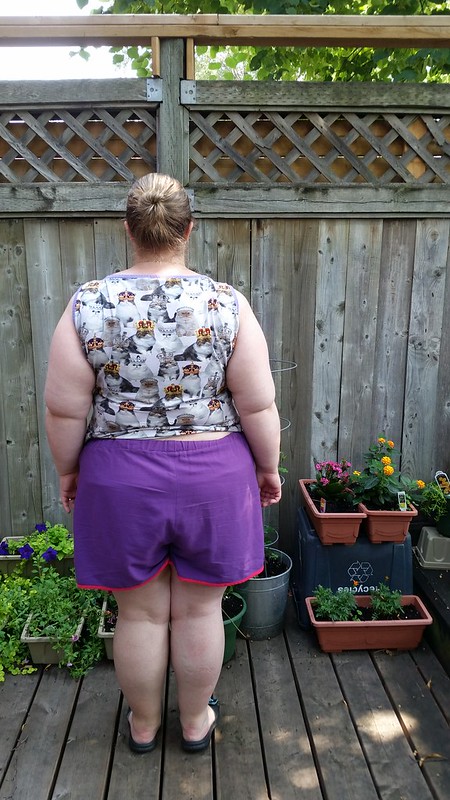 The elastic in the back isn’t twisting or anything, just wasn’t sitting right for the picture. Too lazy to retake it!

15 thoughts on “Made with Moxie Prefontaine Shorts”