Last night I finished the most involved project I’ve ever made in a short space of time.

About a year ago, my husband and I were watching Star Trek: Insurrection. Occasionally, my husband points out costumes or items of clothing that he wants me to make him. This time, he happened to point out one that I was in love with:

The dress uniform has quilted panels across the shoulders and in the zippered front panel, extended front tails, a cropped back, gold lame bias tape accents, red and gold piping details, red bias tape in the collar stand, and red bias tape on the deep cuffs. To my husband’s disappointment, I did not make the funky braided ceremonial hat for his head.

I definitely procrastinated on this for a while. I was a bit fearful of fitting another person in such a tailored looking jacket. I assembled the materials for it after we watched the movie, but they sat around until last week.

I was able to find gold lame bias tape from fabric.com. It has a fusible back. While it was thin (1/4 inch), I used two lines of it in most places. I got red bias tape from fabric.com as well, but it is the low quality poly/cotton stuff. I should have bought the good stuff locally, but it is just a costume piece. I also got white poly cotton twill from fabric.com, but the grey stuff to eventually make a lower rank dress uniform for myself with the grey zippered panel. I did not find a good choice for the red and gold piping. Most stuff I found was thicker, upholstery grade and would have been difficult to sew in because of the many many layers of fabric. I decided to leave it off.

This captain's uniform from Star Trek Insurrection is what I am working on this weekend for my husband. What about you? #sewing #sewcialists

I started with M7216 for my pattern. PSA to all, it’s so easy to fit someone else, especially a guy! I started with a tissue fit to see if the pattern out of the envelope would fit him. There were some adjustments to make: full belly adjustment and a narrow shoulder adjustment, but overall it fit him really well. After those adjustments, I modified the pattern to have a front panel, as well as a bit of a curved side panel to make the fit over the stomach a lot cleaner looking. I raised the neckline and then used the collar stand piece from my M6696, because it was the closest pattern with a stand. Collar stands are pretty universal. I also added shoulder pads to give more structure to the shoulders.

Instead of adding panels for the quilting to the shoulders, I just sewed detail lines there and in the front zipper panel, too.

Pieces all cut out for my husband's #startrek jacket. Drawing in lines for the quilting details. #costuming #cosplay #sewing #sewcialists

Took yesterday off but I am back at this costume today. Just finished marking the quilting lines on the shoulders. Employed some math from elementary school. #sewing #sewcialists

My calculations paid off!! The V on the shoulders looks amazing. The sleeves aren't set yet. Just pinned. So I hope setting them goes well! #sewing #sewcialists #costuming #cosplay

The sewing process was quite involved with all the lines and bias tape that needed to be matched as well as the cuff and collar.

The construction on the collar was a bit rushed as it was a half hour before we left for Fan Expo to perform, but I am not going to beat myself up on it.

I love the cuffs.

One cuff down. The other is half done. It looks super snazzy. I can't wait to see it with the collar in. Sadly out of energy for the night. Hopefully time to finish before our Star Trek improv show at #fanexpo2016 @improvdandies #sewing #sewcialists #costuming #cosplay

My husband looks absolutely fantastic in it and it showed in his improv last night, because he kicked ass.

We performed last night at Fan Expo with PJ Phil from YTV’s the Zone. He was PJ in the 90s and I came rushing home from high school to watch Sailor Moon during the Zone every day. PJ Phil is a Canadian celebrity, especially for us 90s kids.

It was a lot of fun and Phil was a great Admiral Sulu!

The crew of the Albatross with Admiral Sulu aka PJ Phil from YTV's the Zone. For my international friends, he is a Canadian celebrity. #cosplay #startrek #improvcomedy #torontocomedy #toronto

Helllloooooooo #fanexpo2016 Such a posh looking cast for #holodeckfollies If you miss tonight in 15 min, we are here tomorrow at 5:30 in 701B. #startrek #cosplay #improvcomedy #torontocomedy #toronto

I made the other uniforms excluding the other female performers’ uniforms which they purchased on their own. You can read about the guys uniforms here.

The jacket is my crowning achievement, though, and has given me so much confidence with sewing going forward. 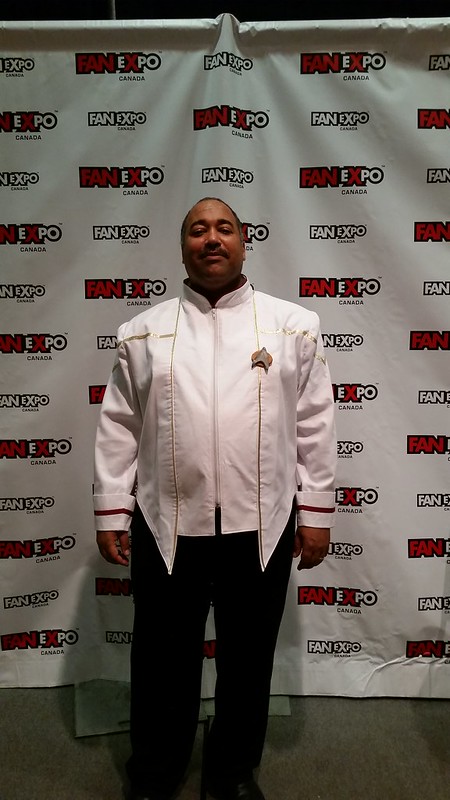 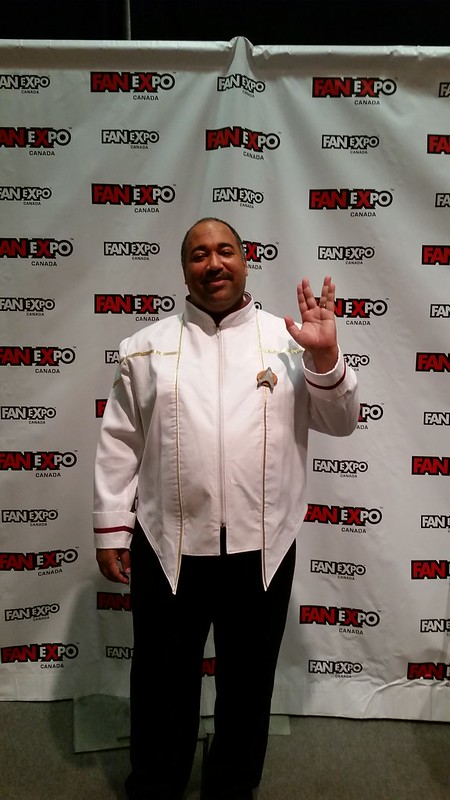 The back fits incredibly well, but you will have to take my word for it since I didn’t take a picture of it.

Next up is to adapt this pattern into a Captain Kirk uniform from the early Star Trek movies for our performance at C4 in Winnipeg in October opening the Con and for William Shatner:

My husband is eventually going to have an entire Star Trek cosplay closet along with his TNG uniform. It’s going to be great. I need to get business cards with my blog so when people ask him who made his spiffy costumes, he can pimp my blog. 😉

If you are in Toronto, come see the Dandies perform Star Trek improv at Fan Expo again at 5:30pm tonight in 701B. If you can’t make it to that, we also have our regular show Holodeck Follies on Wednesday night at Social Capital Theatre.

In terms of the pattern and giving it proper review, I feel I can’t really rate it fairly since I changed it so much. I do think, though, that the mark of a good pattern is being able to adapt and change it without the fit falling apart.

Live long and prosper or, as we say in the comedy business, Laugh Long and Prosper!