I didn’t sew all November and now I have a huge amount to sew for the holidays. Luckily all knits so they should go pretty fast. I can’t post about the projects until after Christmas, but I will be posting my Top 5 of 2016 again this year along with stats and such. Should be fun. I am also hoping for a sewcation for the holidays so I hope I will have a new project to share after. 🙂

This project was the last one I worked on.

Back in May, my friend, Nicole, posted on facebook that she was annoyed with the selection of baby bedding and how expensive it was. Nicole had recently announced that she was pregnant with her second child. I immediately commented that I could make her something. We worked out an arrangement where she paid for the fabric and I covered the labour as a present to her.

Plan was to make a quilt, a bed skirt, and bumper pads. We picked out the fabric from fabric.com in June and got it in July along with a few things locally and the quilt batting locally. I started the quilt in August with two decorative squares. One using applique:

Progress on the feature square of the baby quilt I am making. All done with this square now I can get the rest done! It's so cute. I almost want to keep it for myself. Lol! #sewing #sewcialists #quilting

Nicole sent me the design for the fox when she sent me a bunch of inspiration for the whole set. 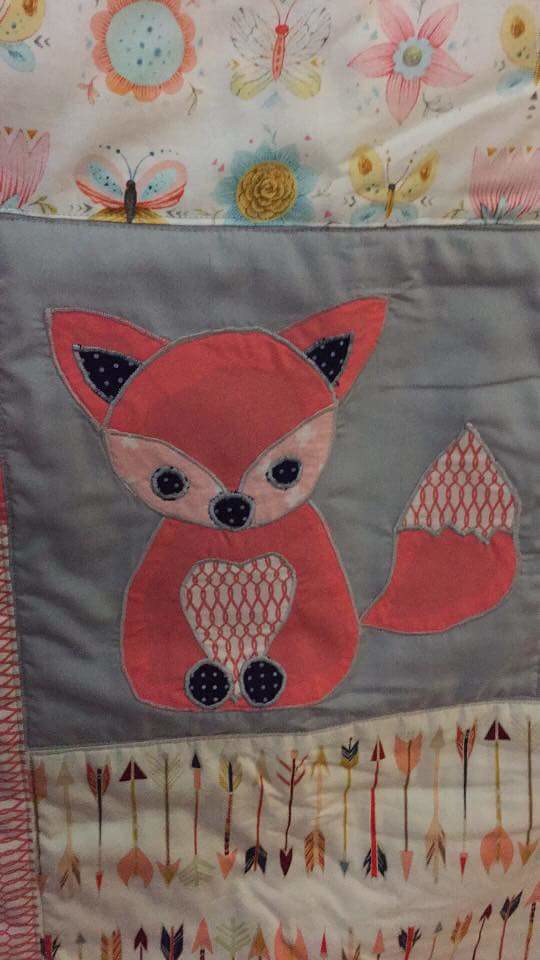 As a surprise, I embroidered the name on a quilt square with an arrow:

I had a shitty day. Work was a mess and then I had a doctor's appointment where he did an exam on my shoulder and basically now I need to cocoon in bed with netflix and cry a lot. My IG stories are hilaritragic. But I came home to admire the embroidered name square for my friend's baby quilt. Charlie is one love little girl. 😙😙😙 #sewing #sewcialists #embroidery

I haven’t done a lot of embroidery, but this makes me want to get into it more for adding fun details to clothes.

The rest of the squares and rectangles on the quilt were created without a plan. I cut the quilt back to size first and then arranged the pieces on top to get an idea of the layout.

I changed the placement ever so slightly because I realized parts didn't make sense for sewing and I needed one more pink feathers square. I love seeing it with the name square. It's so cute! #sewing #sewcialists

I squared up the pieces and sewed.

Quilt all sewed up. Just need to square it off. Also need to get batting and cut the binding. #sewing #sewcialists #quilting

And then sandwiched the layers together and used safety pins to make them lay right for quilting. I’ve never done a quilt of this size before and have literally only done one quilted wall hanging before so this was all a new experience for me.

For the quilting, I just followed the lines of the squares to make sure the feature was the gorgeous fabric and those two feature squares.

Finished quilting the baby quilt. Just did a basic outline of each square but I think it's great. #sewing #sewcialists #quilting

For the binding, I could not wrap my head around how to do it and just sort of winged it. I have since looked up more tutorials and am kicking myself for not getting it, but I didn’t want to rip it all back and really it looks just fine. The binding is a navy blue polkadot print. Difficult to tell in these pictures:

The skirt was pretty simple to make. I followed this tutorial, but didn’t make a box pleat and chose to use two different fabrics.

The bumpers were a bit more difficult. I didn’t get the length right the first time and I piped the tops of them with the same navy polkadot fabric. I had to rip it out and redo that and I messed up the position of the ties so that also needed to be fixed as well. After you add the batting, you then quilt lines through all layers at each tie except the end ones so the batting sits flat. My heart was a bit in my throat since I was sure I would mess that up, but it worked out great.

A complete baby bedding set. This is heading to it's home with baby Charlie tomorrow! 😘😘 #sewing #sewcialists

And then I tossed it in the mail. It didn’t make it to their place in time for Nicole’s mother to see it in person. That’s Canada Post for you! They guarantee 7 days and it gets there in 10…

Nicole took some pictures of the nursery with everything set up and I am in love with it. I sent her fabric samples once she chose the main fabrics and she picked paint colours and accessories based on the samples. The room looks like something off pinterest! 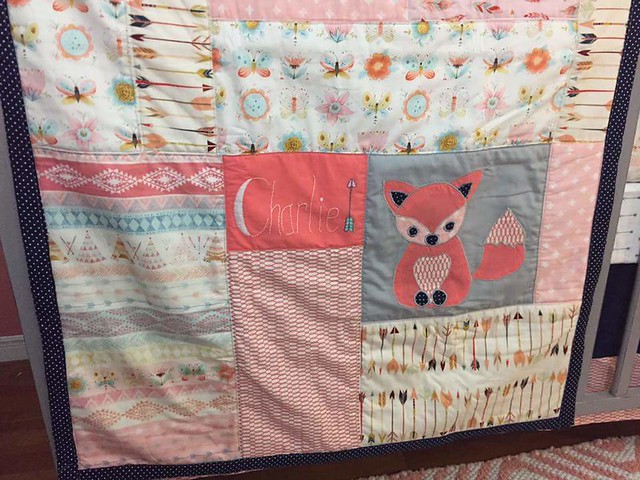 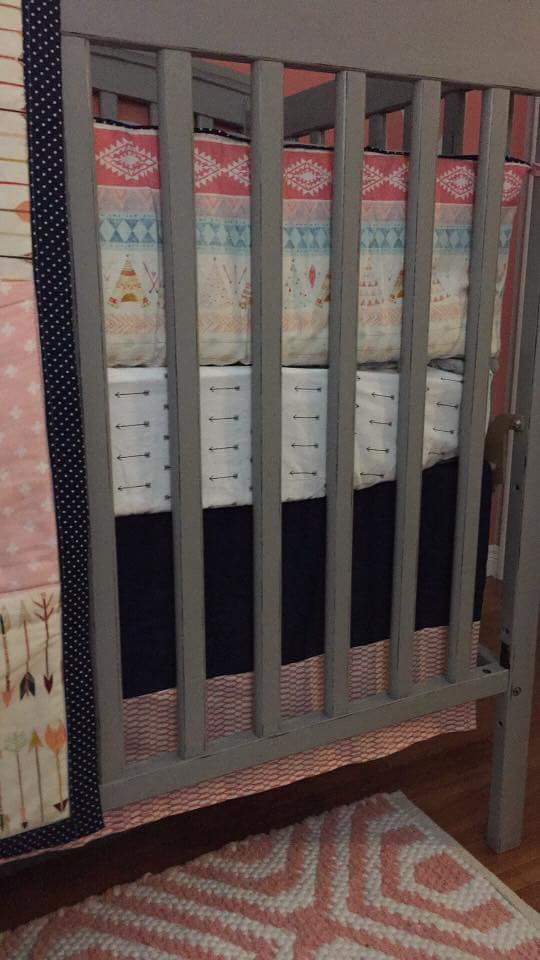 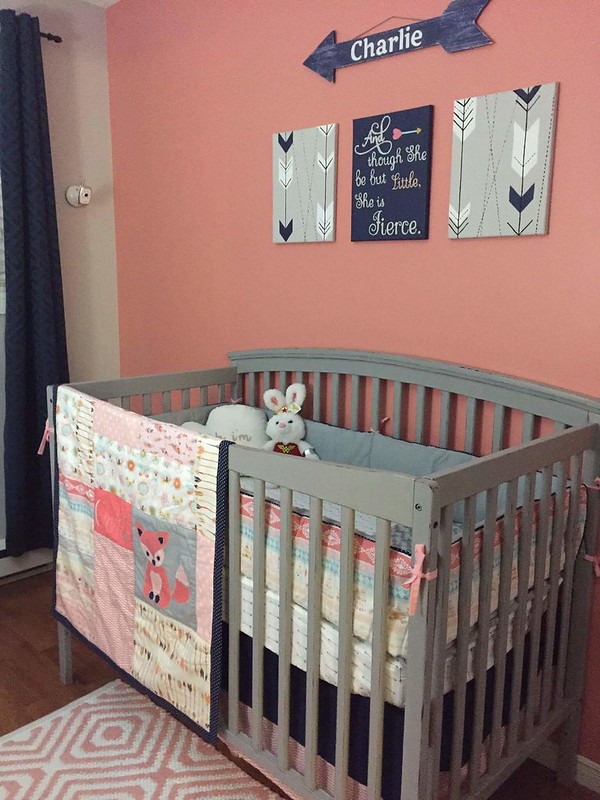 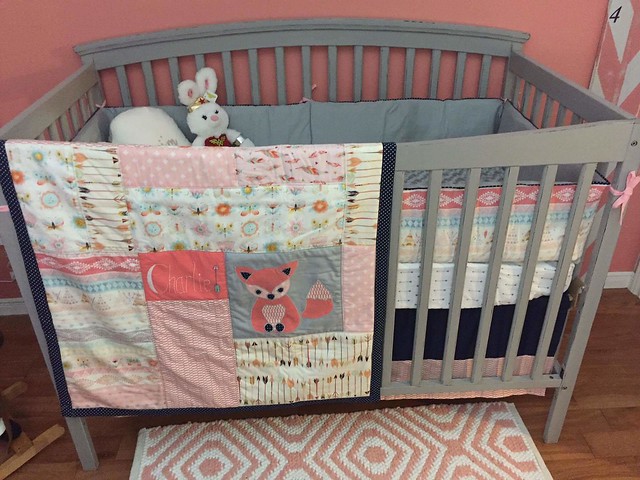 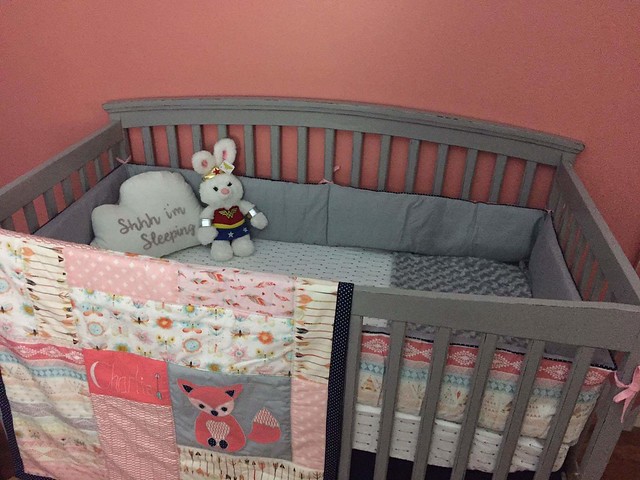 Charlie is a super lucky little girl to have such an awesome mom. ❤ ❤

9 thoughts on “A Bedding Set for Charlie”