The Turner dress was the last garment I made in 2016 and the first refashion I did in 2017! Haha. I’ll get to why I refashioned it later in the post. All of the pictures in this post are mirror selfies fyi, because it’s cold outside and I am in hibernation mode so the fact that I am taking pictures at all is a huge thing. I never promised professional photography here people!

I tested the Turner dress in March before leaving for my honeymoon in April. I brought the tester version with me a wore it a bunch while in Holland and around Scandinavia. I don’t even have a picture of me in the dress there except covered by a coat, because I was too worried about accidentally posting it on instagram before the release. 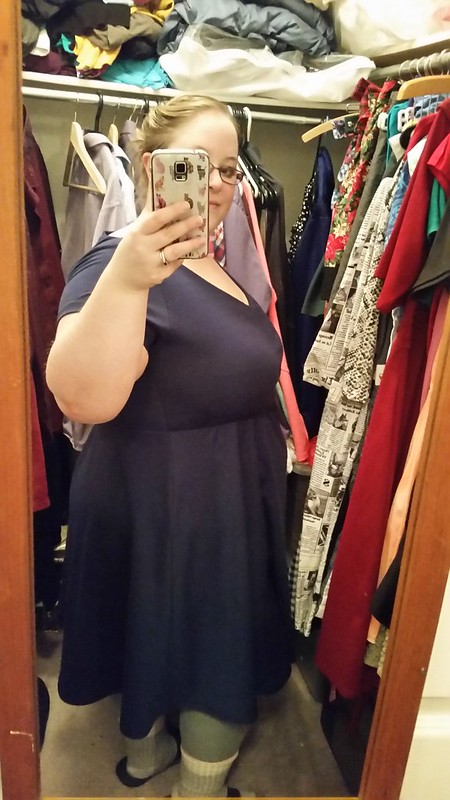 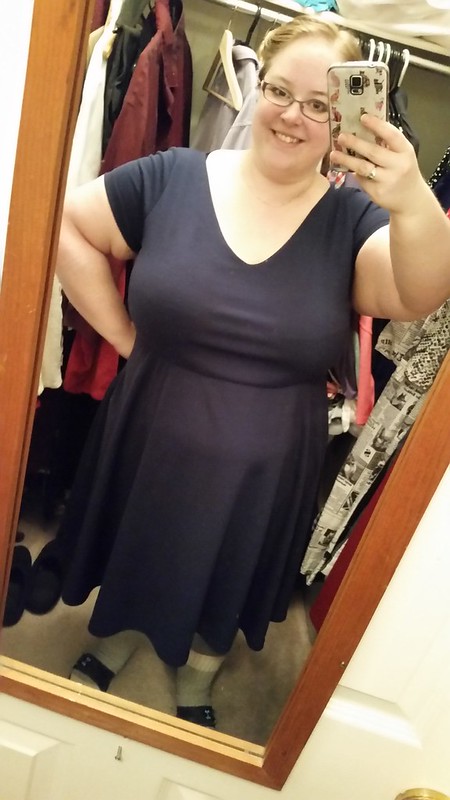 Ignore the wool socks with flipflops. These pictures were taken in March last year and it was cold! The fabric I used for my tester version was a navy ponte with enough stretch for the pattern. I picked it up at the thrift store. I love finding good scores there.

The pattern goes together really quickly. There’s clear elastic at the waist to stabilize it. Debbie of Stitches and Seams, however, didn’t use elastic at all and has a stable seam. I think with the right fabric you could definitely follow her method. I’m allergic to the clear elastic so I just used regular latex free elastic. Likely this ponte fabric as well as the ponte fabric I made my friend’s dress out of are totally fine without elastic. 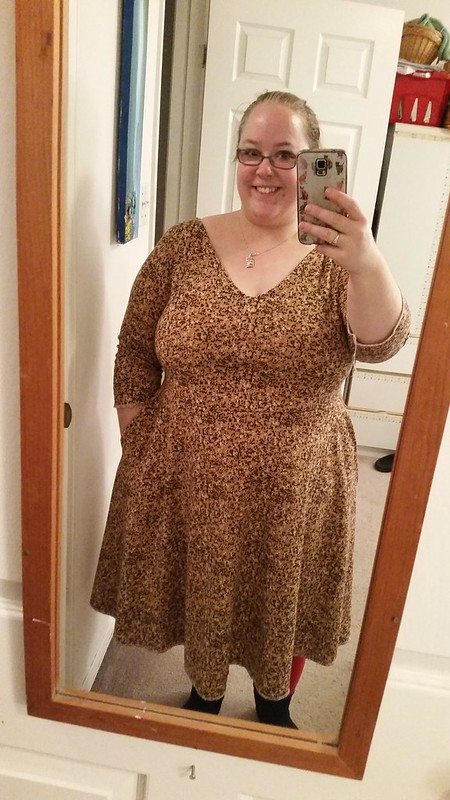 Both of these are lined bodices. I added pockets to my friend’s dress, because pockets are amazing.

The week before Christmas, I went to Fabricland at Honest Ed’s. It was having a closing sale so I picked up this pretty rayon poly knit:

Got some lovely fabric for a #turnerdress at Fabricland in the Honest Ed's location that is closing next week. It was great having one in the city again. I also got flannels for the last two Christmas presents I need to make. #sewing #sewcialists #fabricaddict

I figured it was perfect for a Christmas dress that would look good beyond Christmas.

Sadly, there are no more Fabriclands within a good distance from me. The most accessible one for me, I believe, would be at Dupont and Dufferin, but that is an hour from my place by transit. I am still really close to Toronto’s Fashion District, but it is often difficult to find sales or even printed knit fabric that isn’t completely polyester. Hopefully a Fabricland will appear again in a more accessible location sometime soon.

It wasn’t until Christmas day that I was certain that I would be making this dress. I was sick most of the holidays and it’s irritated my breathing issues and made them worse again. So it wasn’t until around 1pm on Christmas Day that I decided to start making it when we were leaving for dinner at my husband’s sister’s house at 3pm. I got it done at 2pm! Before your jaw drops off, I already had it cut out. 😉 I also did a modified neckline and used the scoopneck from my concord t shirt pattern and the band. I also cut out a 22 G/H graded to a 24 at the waist since my size had changed slightly since the last time I made it. 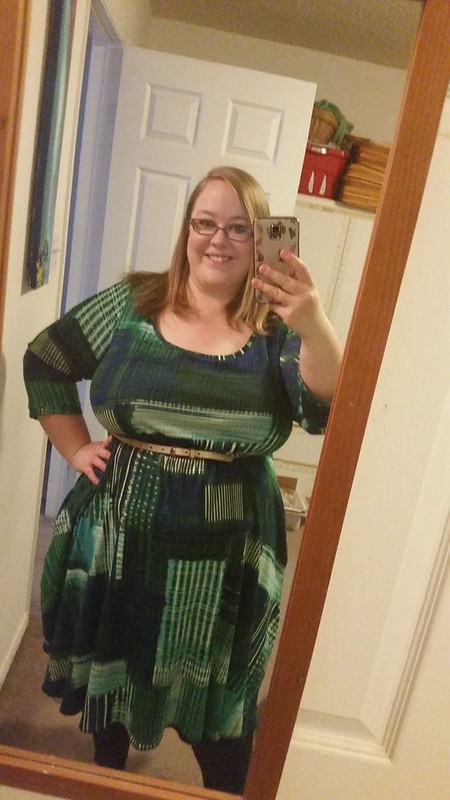 It worked out really well and we were out the door in time. But as the night went on, the dress stretched and stretched….. and the knit fabric had zero recovery… so it looked a bit like an off the shoulder dress after a while… I wore it one more time to work and then tossed it in a corner to be fixed. 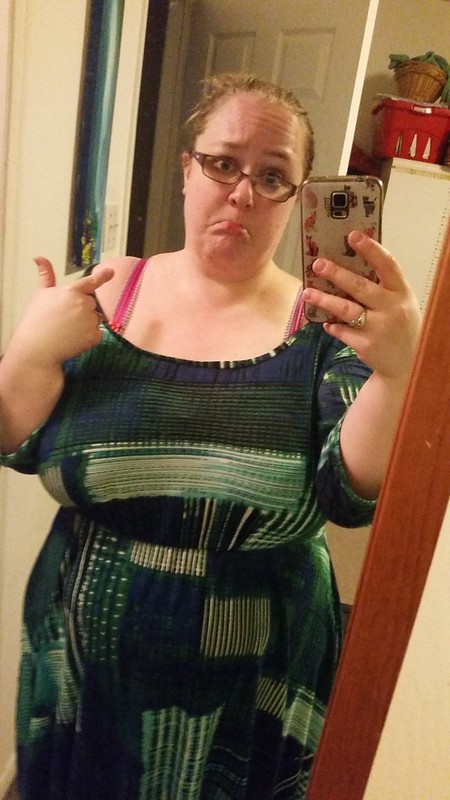 Inspired by Gillian’s recent series Lazy tip for fixing knits, I had to make it work! The best way to fix it in my mind was to do two things: stabilize the shoulders with some elastic (probably should have done that in the first place! HAHA) and replace the neckband with a cowl to cover up an modesty issues that may arise with the recovery issue. I didn’t take off the neckband when I put the cowl on because I was worried about it stretching out further, but I did serge it off. 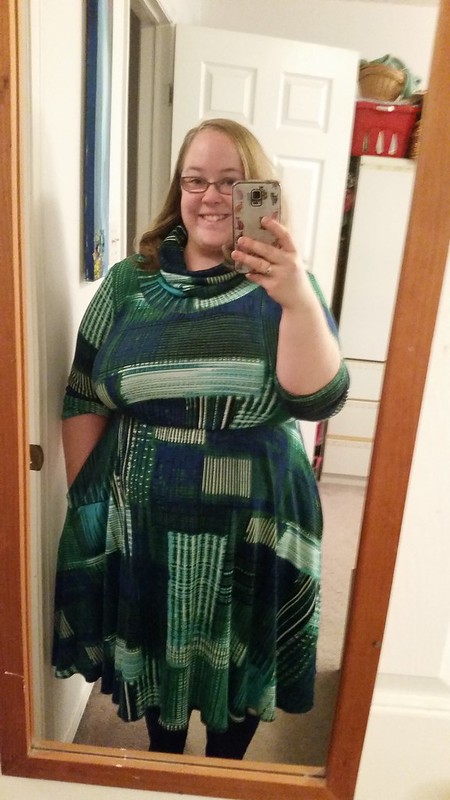 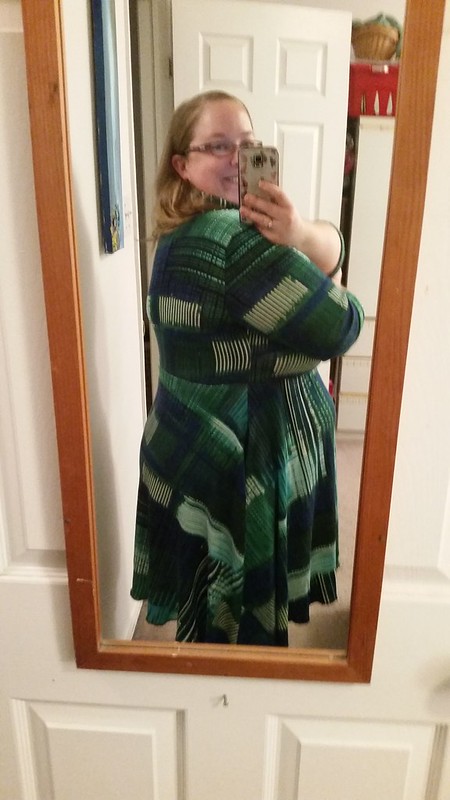 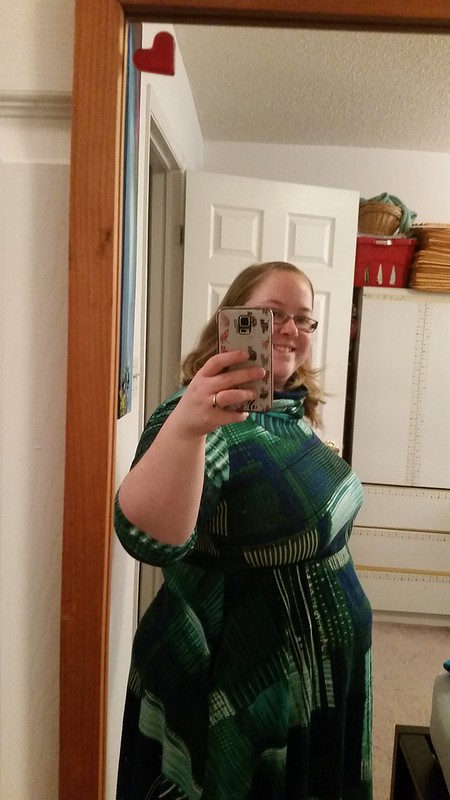 I definitely like the refashion and might actually do this again for another Turner dress with a slightly different shape for the cowl. I love cowl necklines so I call this a win.

The cowl is also long enough that I can hide in it. I think this will be useful for the winter hibernation. 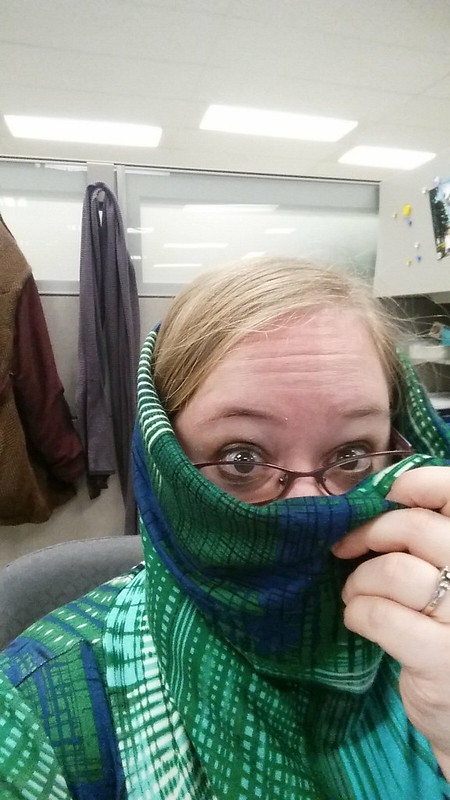 30 thoughts on “Cashmerette Turner Dress for the Holidays”