For Sewcialist tribute month, Gillian asked me to contribute to the blog. I knew immediately who I was going to make a tribute to: Tanya from Mrs. Hughes.

I’ve been following Tanya since 2012. She is one of the reasons I got back into sewing in 2013 along with the other editors at the Curvy Sewing Collective. My adventures in sewing had been all over the place before. I was convinced that sewing patterns were incompatible with curvy women. I didn’t know about FBAs or other pattern adjustments. I still use Idle Fancy’s tutorials on that.  I also mostly saw bland clothing out there for plus sizes. Nothing colourful or interesting and certainly nothing with reasonable prices and shipping for a Canadian gal. I ordered some dresses from modcloth and eshakti, but I had to wait for sales. I knew I wanted to sew all my clothes since I bought a sewing machine in 2009, but I didn’t feel like the majority of sewing bloggers reflected my needs. When I started following Tanya, all that changed. Her style was exactly what I wanted to sew! Vintage, colourful, and lots and lots of dresses! 😀

Eventually after a million comments, Tanya and I became friends. She sent me the Decades Everyday ESP dress and Wonder Woman fabric and I knew my tribute to her would include both. 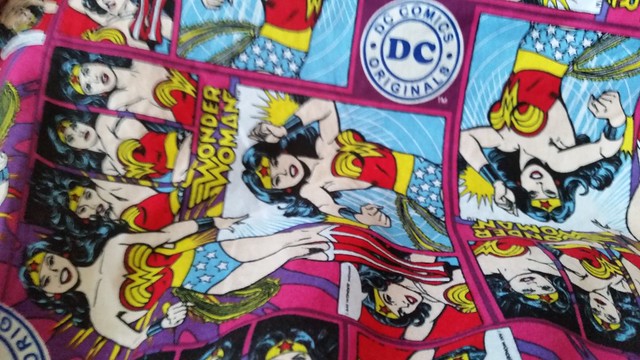 If you don’t know, Tanya is the queen of the ESP Dress. She has several versions in all different kinds of fabric, including her very own Wonder Woman ESP Dress.

I love this dress! 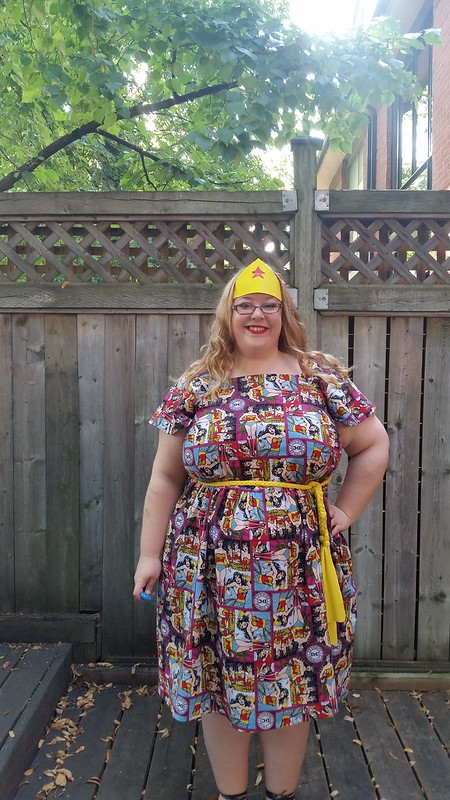 The ESP dress only goes to a 46 bust, though, which meant I had some pattern alterations to do for it. I did a 2.5 inch FBA on the largest size to give me 5 extra inches for my 51 inch bust. With the ease in the pattern, it worked out perfectly for me. I also did a large bicep adjustment on the sleeves. The sleeves weren’t tight, but I wanted a bit more ease of movement. For the future however, I will need to increase the armsyce just slightly since it is a bit tight and high.  The FBA added space to the waist. However, I could have made the waist darts a big bigger since the dress doesn’t quite come in enough at the waist without the belt. I also lowered the neckline since I knew that would be too high for me. After a muslin, I did a slight hollow chest adjustment at the neckline. I will also be taking a wedge out of the back neckline too next time. 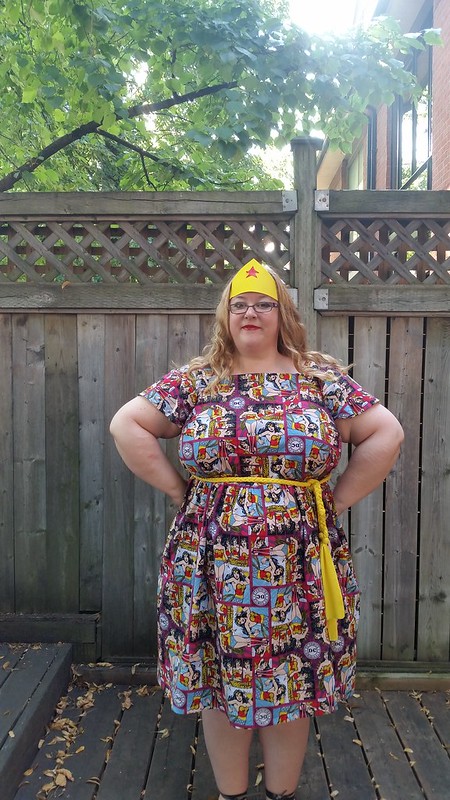 For the skirt, I was restricted with the width due to fabric constraints. I think the fullness works, though. 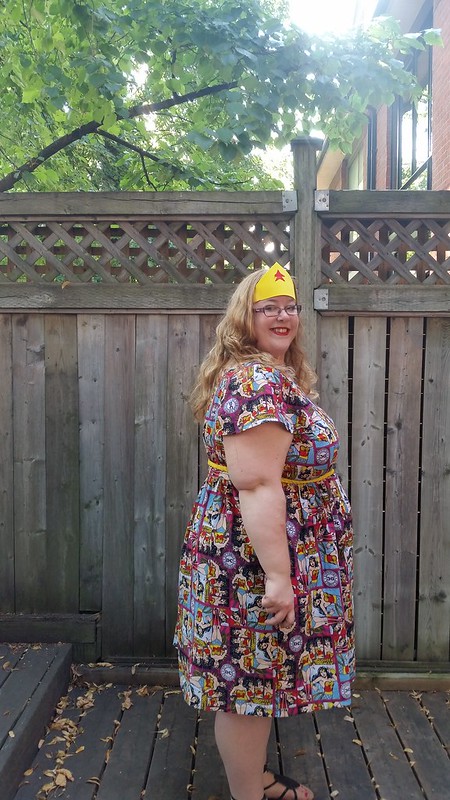 While this dress isn’t going to worn to work that often, it will get a lot of wear at cons or on the weekends. Basically any excuse for Wonder Woman! 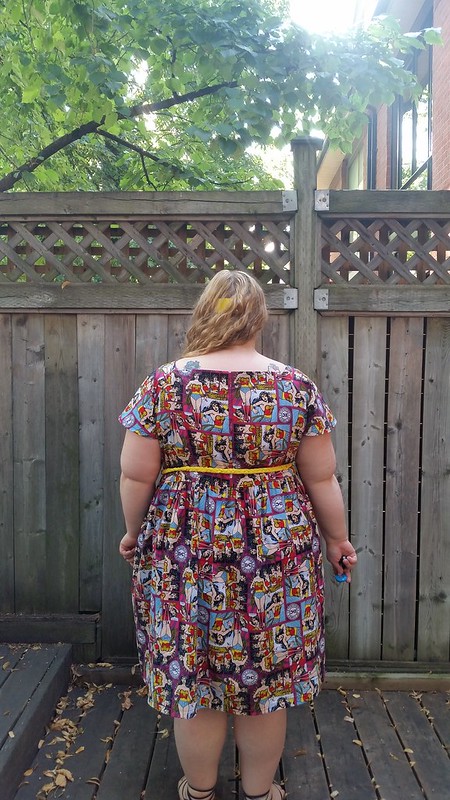 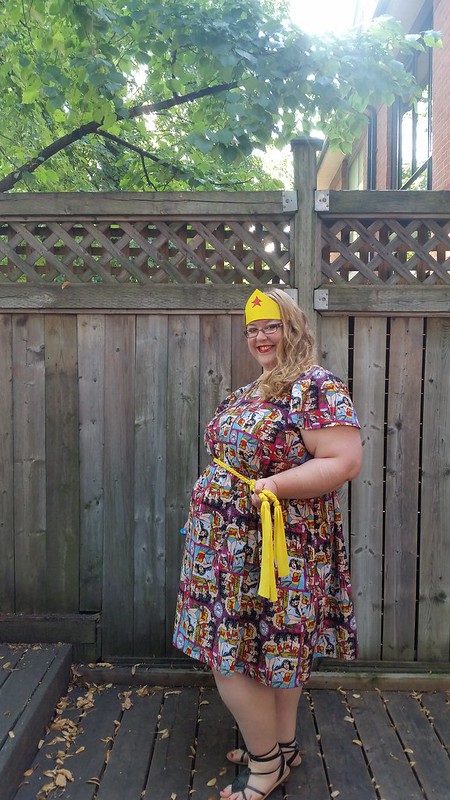 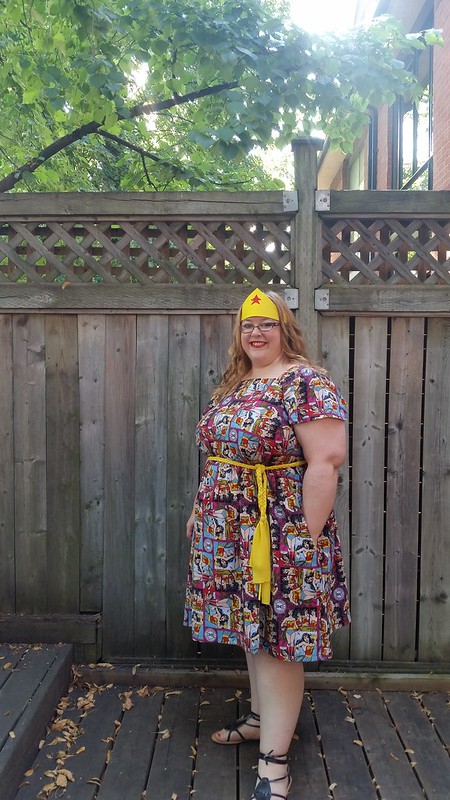 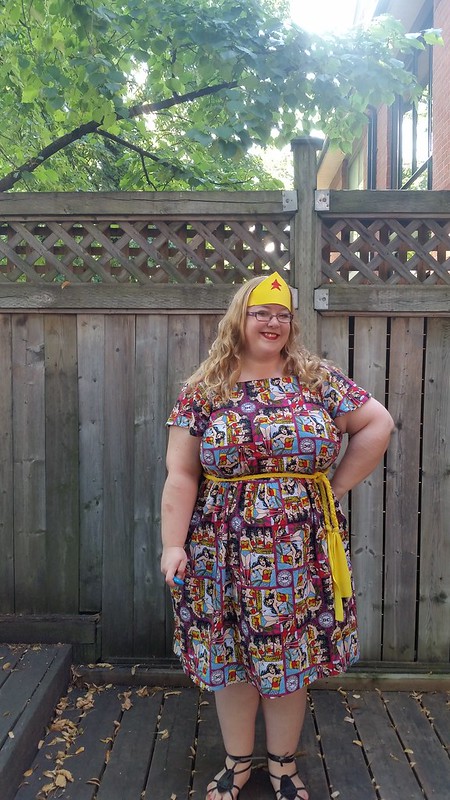 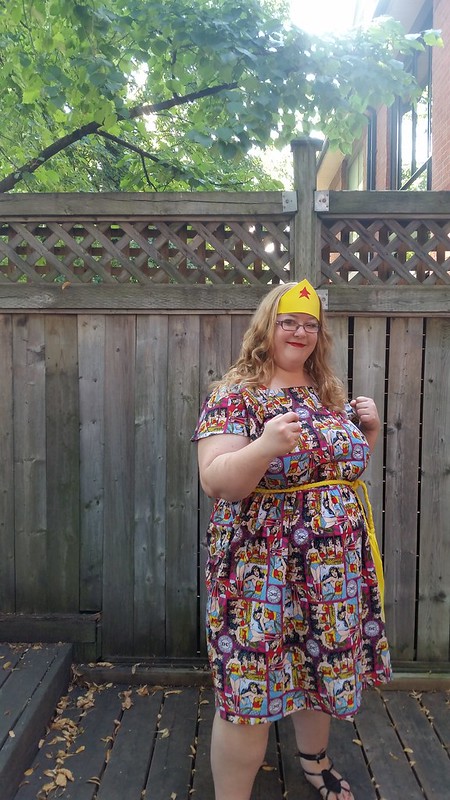