I don’t wear a lot of black anymore but I used to wear black in my early teen years. I like sporting black tops and a million “Goth” necklaces. It didn’t last long before I thought that the black made me look super pale and I started having allergic reactions to the bad metals in the cheap necklaces. A rash on my chest plus a super pale face just looks like I am suffering from a terrible disease. Turns out it was a terrible disease!! (EDS joke!) …But not an infectious one. I eventually settled in to a more grunge style with men’s jeans or super baggy overalls and a large amount of vintage t-shirts with men’s button up shirts or a plaid flannel shirt over top.

Ever since, I haven’t really cared for black anything. I wear black pieces but never a full black outfit anymore. A little black dress is a piece women are often told they must have in their wardrobe. I’m not really one for being told what to do, but since I wanted to make more party dresses last year, I thought I would make one. And yes, this project was started last year.

I used the Cashmerette Upton bodice and the Tenterhook Patterns Snapdragon skirt with a curved wrap front. Sadly, Tenterhook Patterns is completely out of business, but there are other woven pencil skirt patterns you could use to recreate this look.

I made a dress that I am not happy with. It looks okayish from the front but not the side. Ughhhhhhh. Before I sew on the shoulder ties and sew the bodice lining in, I guess I have to figure out how to make this less tent like in the front waist. I'm thinking fisheye darts? Suggestions? I'm also going to shorten the whole dress. This length is not to my taste. #sewing #sewcialists

Thanks to @debek301 and @sewanista for your help! It's just pinned here but fisheye darts and some taken in at the side seam make the difference I was looking for. I will make these changes tomorrow plus hem about 2 inches shorter. Then I just add the shoulder ties and I'm in #littleblackdress land #sewing #sewcialists

And then, as with every time I plan a bunch of stuff, I started thinking… Oh I should maybe finish that thing first…. So I picked it up.

Instead of doing fisheye darts like I was originally going to do, I wanted to maintain the waistband without interruption. So I unpicked the bodice and skirt from the waistband and I put an additional dart in the bodice at the waist. Shortened the waistband by about 2 inches and put a dart in each side of the skirt at the waist and then tried it on and was much happier. 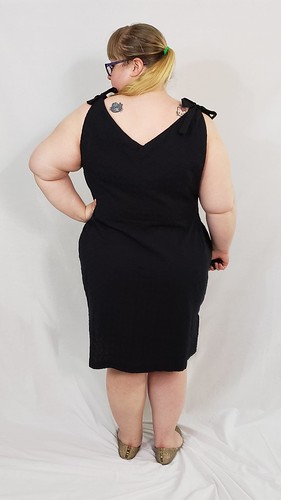 My plan with the dress originally was to make it accessible so that if I was having trouble with my shoulders, I could easily get in and out of the dress. I put ties in at the shoulders and an extra long zipper at the side. There is about 4 inches of side seam at the bottom of the dress on the right side only because I forgot that I didn’t get a separating zipper for it. Originally, I was going to use a separating zipper and then have slits on both sides. I still have slits on both sides but not a completely open side seam for the zipper. In retrospect, that makes it a bit easier for me, especially when getting into the dress.

I bought the fabric years ago. One of the first bits that I added to my stash. It’s a black cotton embroidered with leaves. It’s like an eyelet but without any holes. It’s actually really challenging to sew and my old machine had a lot of trouble sewing it. The embroidered sections are difficult to sew over and are really thick with thread. My new machine went over it without issue, of course. Yeay for the Singer 4452.

I added pockets when I redid the dress. I love having them in the dress. If I ever make another in this style, though, I will use a slash pocket that is anchored by the waistband. Because the pockets aren’t anchored, they fall open a bit. It’s not a huge issue, but doesn’t look as great as I want it to look. There is also a strange pucker on the left bust dart and a bit of gaping at the armsyce. I am guessing that is due to my left shoulder being more dropped that my right shoulder. I likely need to make sure that side is tied a bit tighter.

I’m really glad I made this dress. I think it will be great for at least one of the weddings I am attending this year.

And because I don’t really wear solid black anymore… It also happens to look fabulous with my outrageous Designer Stitch Willow Wrap. 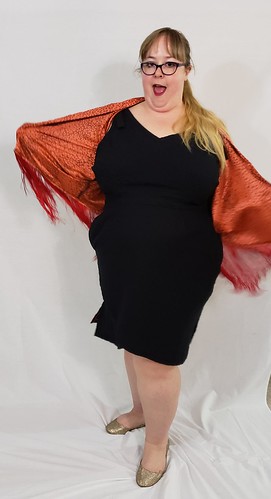 Last year, I got a bunch of fabric from Minerva Crafts as an Monthly Stitch Indie Pattern month prize. I also got a voucher for Designer Stitch as well during that month and got the Willow Wrap. Among the fabric was this orange animal print satin. It’s definitely a bright and outrageous print, but I fell in love with it. I sent some fabric to family in the Dominican Republic for a fellow sewist who lost a lot in the hurricane last year. I almost sent this fabric but then pulled it out of the pile because I had the brilliant idea of making a shorter Willow Wrap with red fringe. Don’t worry, I pulled something else out of my stash that was fabulous to replace it for the gift. I had a meter of this satin and basically decided to cut the length to whatever I could fit on to the piece of fabric. It is cut about 4 inches under the curve of the sleeve.

It’s a really weird garment even for me who loves wacky fabrics! But I really really love it. It was quick to make. The thing that took the most time was trimming the fringe so it was all relatively even.

I think it looks great paired with my LBD. It also looks great with my white upton dress with tie sleeves underneath. Both dresses make it the focal point and don’t overwhelm the eye too much.

What is the most outrageous thing you have made?

16 thoughts on “LBD and a Designer Stitch Willow Wrap”